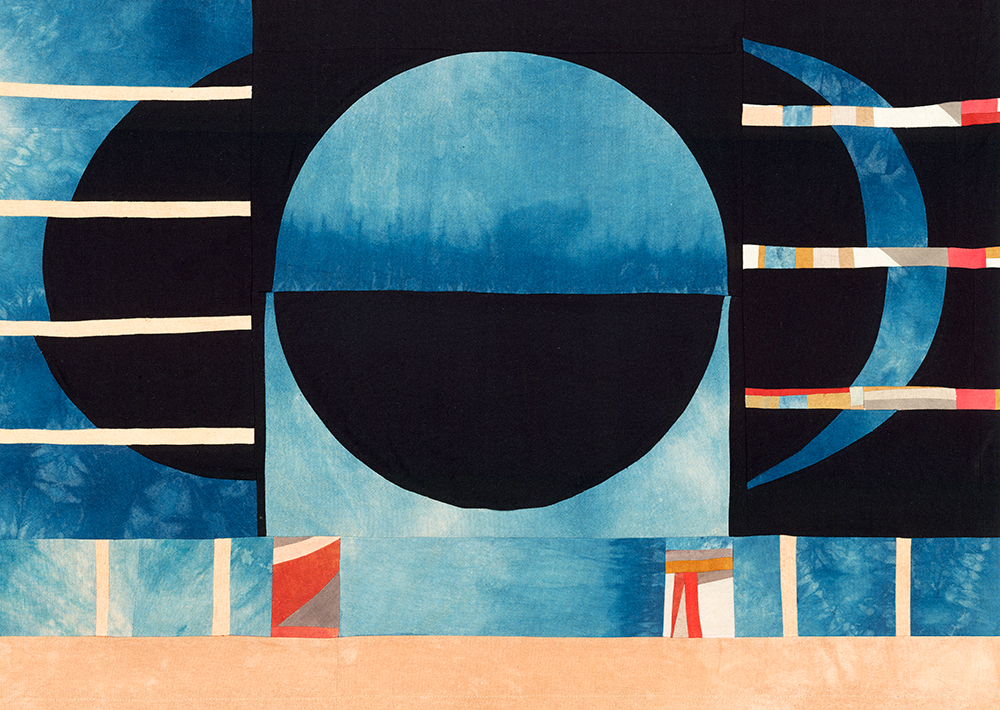 Greetings, artlings! We’ve got an extra special celestial stunner for you today ℅ Caitlin Parker. Lunar Eclipse arrives just in time to celebrate the total eclipse tomorrow morning. Visible in North America only in the wee hours of the morning, this will be the last total eclipse until 2025! The phenomenon may be fleeting, but Parker’s Lunar Eclipse manages to capture the awe and wonder of this stellar spectacle to keep forever.

About a year into the pandemic, Parker and her young son spent an evening chasing the perfect glimpse of an eclipse. As they watched the moon transform into the sky, they felt transported. They were connected to the larger universe, and though short-lived, they were briefly released from the stress of early pandemic life. Parker wanted to encapsulate this experience in Lunar Eclipse.

Originally created as a large scale textile piece, Lunar Eclipse radiates astronomical energy from all its parts. Parker draws inspiration from the natural world, beginning many of her projects with natural dyes and fabrics. She juxtaposes textures and tones to weave a full, luxurious lunar atmosphere. Black raw silk stands in for the velvety darkness of the night sky, interlaced with pinks, peaches, and golds emitting the warm glow of the moonlight.

Parker uses Indigo dye to create the blue semicircles and crescents, showing the moon as it moves through the phases of eclipse. Indigo is similar in its alchemical process to cyanotype which uses the light of the sun to print handmade patterns into fabric, a process pioneered by 19th century botanist Anna Atkins. Parker’s two debut 20x200 editions—Catskill Prairie and Bi-coastal—also employ this method resulting in bright bursts of plant patterns. Between the sun, silks, botanicals, blooms and now the moon, we can say that Parker’s art practice is truly universal.

You don’t have to be an aspiring astronomer to appreciate the astounding experience of an eclipse, and Parker’s new edition has certainly gotten us thrilled in anticipation of tonight’s display. But juuust in case you happen to doze off and miss the festivities, be sure to snag one of these prints. Lunar Eclipse is undoubtedly the next best thing.