Home • News • New! Beneath the Bird Feeder with Carla Rhodes 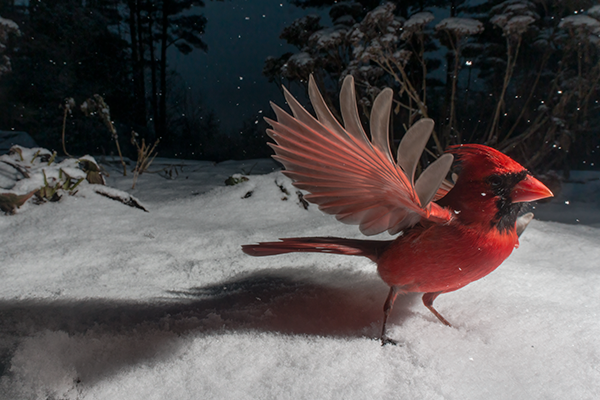 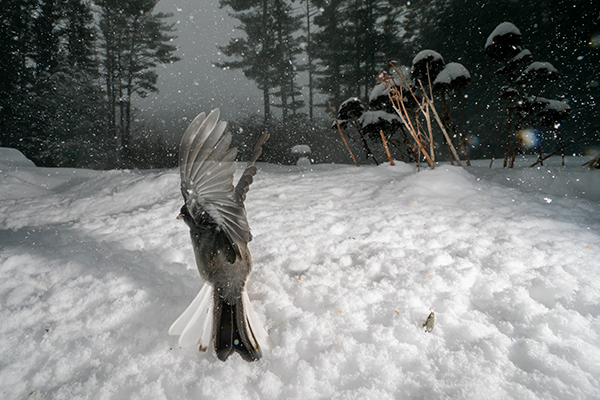 Bird nerds, rejoice! Today’s double edition debut by wildlife conservation photographer Carla Rhodes is an homage to the myriad miracles of nature that await us all in our very own backyards (or fire escapes, or up in that scraggly tree you pass on your way to the bodega down the street.) Technicolor (Northern Cardinal) and Dashing (Dark-Eyed Junco) are two images from her ongoing Beneath the Bird Feeder series, which documents the extensive ecosystem created by the feeder she installed in her Catskills backyard at the start of the pandemic.

In the winter of 2020, the mutli-talented and peripatetic Ms. Rhodes found herself homebound and in search of a challenge to hone her photography skills. She’d noticed all the activity beneath and around her feeder, and set out to build a camera trap, which she refined through an extensive process of trial and error. (It’s no small feat to create compelling images without disturbing the wee beasties themselves!) After lots of experimentation with her camera, its lenses, and the positioning of the feeder itself, she started to surface patterns and stories amid the hundreds of often-striking images she was creating, and soon realized that her personal project could be a powerful tool for encouraging all of us to be more conservation-minded. As she says on her own site: “Imagine if we all paid attention, protected, and respected our immediate surroundings?... It’s all there waiting for us, we just have to open our eyes!”

The series quickly captured the hearts and eyes of millions online, and has appeared in a wide variety of publications like The Guardian, Audubon, PetaPixel and My Modern Met, which all feature interviews with Carla. It’s also gotten nods from our friends at Colossal, and Jason Kottke (our favorite curator of wonderful things!) took notice too. We joined the party ourselves in early January, and were over the moon when Carla reached out shortly thereafter to see if we might be interested in collaborating on a couple of prints.

I’m an avowed backyard birdwatcher myself, with an abiding obsession with my very own roof ravens, so this collab couldn’t possibly be more on brand. Though it was awfully hard to choose a single image to edition, which is how we ended up with two. Technicolor (Northern Cardinal) is a total stunner, with its showy reds and diaphanous feathers jumping out from the stark black and white of a dark Catskills’ winter night. But don’t sleep on the Dashing (Dark-Eyed Junco)! This oft-overlooked ground feeder is a favorite of Carla’s, and this particular almost-monochrome image is serving up some ukiyo-e vibes with a decidedly modern twist.

Carla's process prioritizes the health and safety of the birds themselves and she encourages others to feed birds safely! So go out and get yourself a bird feeder right after you snag prints of these incredible creatures.