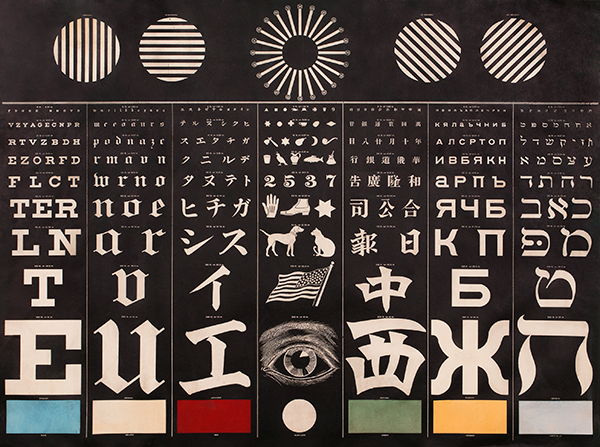 Two years ago this week, we released one of our bestselling Vintage Editions, Eye Test Chart by German optometrist George Mayerle. Yes, just weeks before the pandemic, and boy, have we seen some things since. We’re taking it back to those simple, blissful times with a remix: Eye Test Chart (Negative Image). This dreamy, deep-hued design is a whole different vibe from the original—think Dark Mode for vintage art.

Mayerle originally created his Eye Test Chart as a two-sided optical tool in 1907 with the positive version on one side and the negative version on the reverse. The chart combines turn-of-the-century typography, diagnostic necessity, soothingly symmetrical design, and a progressive embrace of an ever-changing ethnic mosaic. While the image is beautifully balanced, it’s also intensely complex, each section, quadrant, and character equally capable of drawing the eye in. It’s a definite conversation starter, a journey that leads to new little discoveries the longer you look. The pictorial, centermost panel is almost hieroglyphic-like at first glance, giving off the air of some sort of aesthetically appealing Rosetta Stone. But what’s really at work here is ingeniously intelligible and perfectly pragmatic.

At the turn of the century, Mayerle was working in the heart of San Francisco. The city’s immigrant population was on the rise, posing a challenge for local tradespeople: how to cater to an increasingly multilingual clientele. Mayerle—himself an immigrant—rose to the occasion. Speaking at an industry conference, he unveiled his international Eye Test Chart, an exam tool he’d developed to better service a rapidly diversifying community.

Combining four of the major tests commonly performed during eye exams, the Eye Test Chart took an integrated, multicultural approach to sight assessment. The seven vertical panels that make up most of the image represent six writing systems—two styles of the Roman alphabet for English and European readers, along with Japanese, Chinese, Russian, and Hebrew characters. Mayerle also included a center panel of non-alphabetic images and symbols for those unable to read any of the writing systems on display. These panels tested visual acuity. Directly above them at the center is a radiant dial, used to test for astigmatism, flanked by four sets of encircled lines to measure the muscular strength of the eyes. At the bottom of the Eye Test Chart, six color swatches gauged color vision, something particularly appealing to the significant number of railway and steamboat workers in the San Francisco area who’d be guided by red and green lights.

Eye Test Chart was marketed as the only optical exam that could “be used by people of any nationality,” and with the addition of that non-alphabetic panel, it was indeed a useful tool for sighted folks of all backgrounds and ages. But beyond that, it embodied a willingness to welcome diversity, to grow with change instead of against it. In the words of Ramapo College American Studies professor Stephen P. Rice: “The ‘international’ chart is an artifact of an immigrant nation—produced by a German optician in a polyglot city where West met East … —and of a globalizing economy.” For an immigrant in need of a vision assessment, anxious about encountering a language barrier, Mayerle’s chart would have been a priceless pathway to peace-of-mind. Whether he realized the full implications of his invention, we can’t say, but there's no denying his Eye Test Chart is a beautiful thing in more ways than one.

Scoop up the original Eye Test Chart for a neutral-toned stunner, or snag the Eye Test Chart (Negative Image) as a bold statement piece. Heck! Pair both together for an eclectic array of historical wonder. Whatever your style, both these editions are certified eye-catching.

With art for everyone,