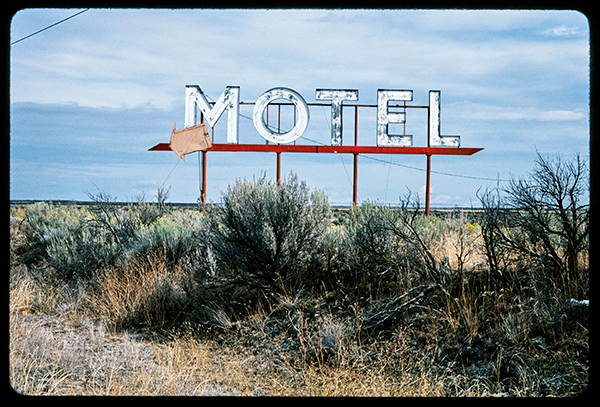 Up for a springtime road trip? Hop in! We’re taking a cruise up to the Pacific Northwest with our latest Vintage Edition, Motel sign, Grand Coulee, Washington by legendary American photographer John Margolies.

Shot in 2003, this retro roadside sign beckons us to a riverside retreat of yesteryear. Heavily weathered and encircled by an abundance of shrubbery, the sign is an ode to what once was. Perched streetside near the Grand Coulee Dam along the Columbia River, Motel sign would’ve been a welcome sight to weary roadtrippers in the heyday of the American Highway. While off-grid Airbnbs and cookie cutter chain hotels seem to have taken over the road trip industry, Mom & Pop motels were once ubiquitous along the country’s smaller highways in the ‘50s and ‘60s.

Margolies was drawn to mid-century roadside architecture from a young age. On family car trips, these commercial structures designed to seduce weary travelers called to him even as his parents repeatedly refused to stop. Margolies took this boyhood unrequited love and turned it into a 30+ year photography career that carried him all across America. In his travels, Margolies shot more than 11,000 photographs of vernacular buildings across America’s criss-crossing network of highways, main streets, and back roads. Many of his images involved the architecture that defined car travel: motels, diners, road signs, and the vital ice cream shop rest stop.

The quintessential American roadside style came about as suburban living boomed post-World War II, necessitating the creation of more paved roads, and more ways to bring travelers into roadside businesses. New building materials and techniques had emerged, allowing for playfully eccentric free-form structures to pop up. Signs, artifacts, and buildings ranged from whimsical to psychedelic, their main purpose an elaborate enticement. As the style spread, critics derided it as “tacky”, “florid”, and “ugly”. Margolies strongly disagreed: in his mind, these ephemeral pieces better expressed the story of 20th century America than canonical works that didn’t reflect the everyday experience of the people who used them.

It was this mindset that inspired Margolies to drive over 100,000 miles capturing a unique slice of American architecture and history, even as it faded. So dust off those driving gloves and call “shotgun!” We’re taking a trip down memory lane with Motel sign, Grand Coulee, Washington.