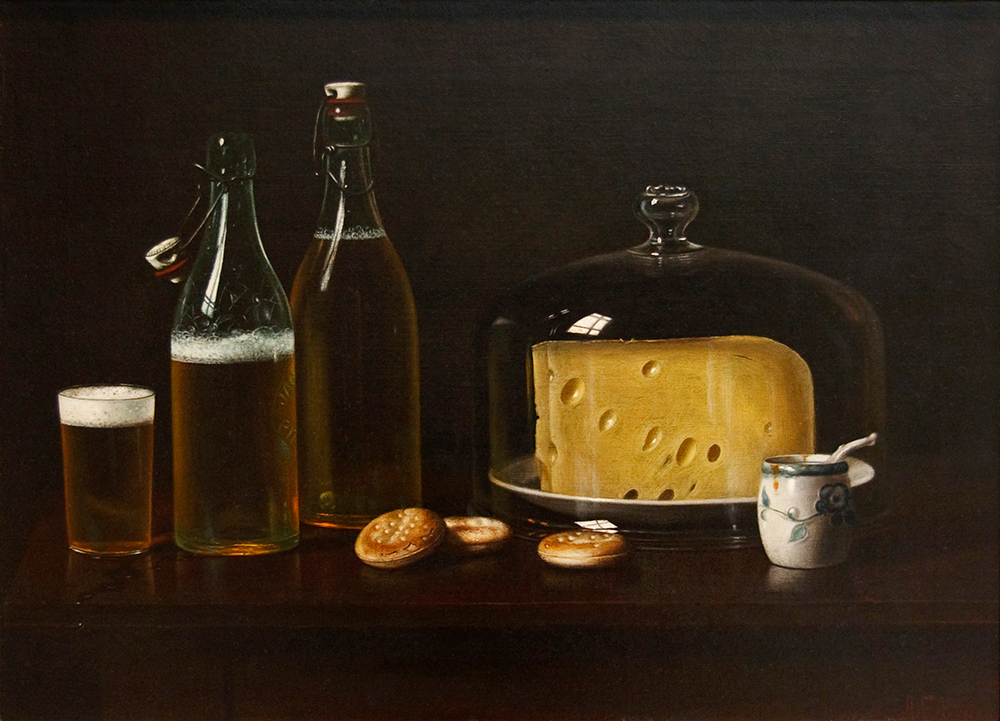 Greetings, collectors! Have we got a treat for you. In honor of the return of Oktoberfest (the first since 2019 - gasp!), as well as the universal start to official snacking season, we present to you our newest Vintage Edition: Late Night Snack.

Created in 1900 by German-American artist Albert Francis King, Late Night Snack is a triumph of tasty textures. From the subtle sheen of the smoothly sliced cheese wedge to the flakey crumbles along the pillowy edge of that first biscuit. A gradient of beer foams climb the walls of the three drinking vessels. Dense, spongey bubbles settle atop the single glass, while large, lively gossamer pockets balloon up the sides of the freshly popped growler. And a thin layer of undisturbed fizz caps the final unopened bottle awaiting its turn. Looks like it’s about to be a good night!

This appetizing array was painted in King’s signature Trompe l'oeil (“deceive the eye”) still life style, a method in which the artist uses close, detailed observation to faithfully render a three dimensional illusion on a flat surface. From Swiss to suds, King’s command of realism is mind-bending. But it’s his deftly deceptive treatment of glass that puts his true mastery on display. With fine lining and careful execution of reflecting light, King skillfully portrays the dynamic translucence, weight, and feel of each piece of glassware. While nearly invisible in some areas of the delicately thin dome of the cloche around the cheese, the glass of the bulbous knob at the top as well as the thick bottlenecks appear notably heftier. And using a hazy amber hue and measured manipulation of refracted light around the beer glass and bottles, King achieves a cool condensation you can almost feel.

Born in Pittsburgh in 1854, King was the son of German Catholic immigrants forced to flee to escape religious persecution. Primarily self-taught, King excelled in realism, becoming a widely sought after portraitist for some of the most prominent citizens of Pennsylvania, including Andrew Carnegie and Henry Clay Frick. It was his illusionistic still lifes like Late Night Snack, however, that dominate his legacy, and we can see why.

This delightful display of nocturnal nibbles has got us in the mood to hightail it to Munich…or at least bask in the glow of the fridge at night. Whatever makes your merry. Most importantly, as a harbinger of autumn, Oktoberfest is a sign that ‘tis the season of snacking. So whether dirdnl, lederhosen, or plain ol’ sweats, gather your grazing garb and get ready to nosh. It’s time for a Late Night Snack. Prost!