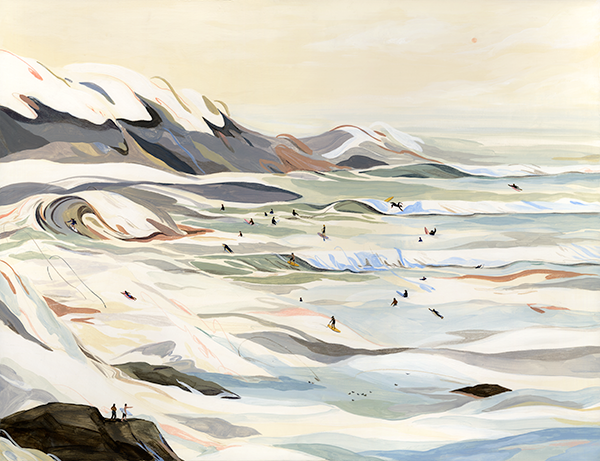 Surf’s up, collectors! Summer’s just a month away, but everyone knows early birds catch the best waves. We’ve got a brand new offshore edition from Sally Deng that’ll jumpstart those summertime vibes. So suit up, paddle out, and ride on into Surf Dreams.

Surf Dreams is a world of its own, grounded only by a single rocky mass serving as a perch for breaktime boarders. Deng’s oceanic scene captures a snapshot of rhythmic movement paused in the perfect place where seascape meets landscape. Cloaked in earthy tones, the waves masquerade as a monumental mountain range with washes of gray and blue accented by rosy swirls. Shades of green wash through the crashing water like rolling grassy hills. And above, a tiny orange sun peeks out through filtered golden haze illuminating the surfers below.

Surf Dreams builds on Deng’s debut 20x200 edition, Gung Ho Go, by zooming out to show countless narratives—from the persistent paddler to the casual coaster, rip curl rider to that wild wipeout. Everyone is a main character here.

One of Forbes 30 Under 30 for the 2020 Art & Style list, Deng has created work for a number of prominent publications—you might have spotted her art in The New Yorker or The Atlantic, for instance. The LA-based artist was named a Young Guns 16 winner by The One Club of Creativity, and has been recognized by American Illustration, the Society of Illustrators, and other esteemed organizations. Parents and kid’s lit fans also oughta take note of the two children’s books she’s illustrated: Skyward (which she also authored!) about three girls who become World War II pilots, and last year’s Yusra Swims, about a Syrian refugee who becomes an Olympic athlete. But what first caught our eye was the expressive linework, evocative use of color, and absorbing movement emanating from Deng’s pieces. Surf Dreams packs serious beach day vibes to boot, and we’re pretty sure we’re not the only ones itching for some salt air. Whether you're sprucing up your surf shack for summer or stuck in the city looking for some hang ten inspo, Surf Dreams will have you droppin' in to an endless summer.