Home • News • New Hilma! This one’s for the mamas 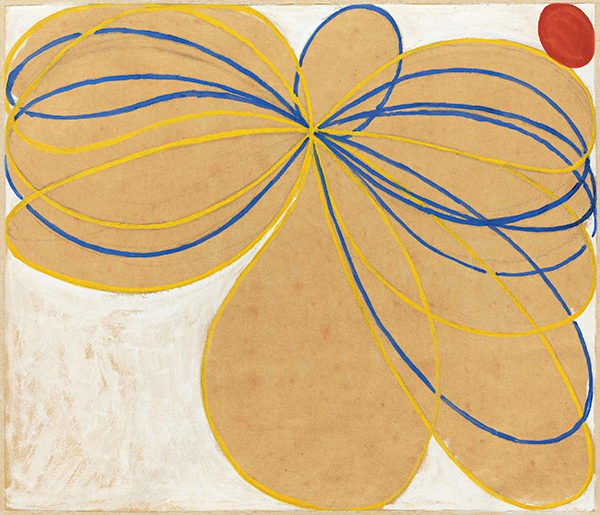 Greetings, Hilmaniacs! Have we got a treat for you. Our newest Vintage Edition is fittingly steeped in symbolism, our seventh Hilma af Klint release: Seven-Pointed Star No. 1. And in honor of the Mother of Abstraction herself, it’s here just in time for Mother’s Day. (PS - Don’t forget to get those gift orders in by 4/29!).

A pioneer of art, spirituality, and feminism, af Klint was a true creative force. And if you (like us) worship Hil-majesty the Klint, this new edition is positively irresistible. Seven-Pointed Star No. 1 is part of the Seven-Pointed Star Series, also referred to as the Evolution Series. With this group, af Klint experimented with more linear shapes and forms rather than solid swaths of color. In each, energetic strokes spiral outward from a centered point on the canvas, always in multiples of seven. In No. 1, seven yellow and seven blue curving lines balloon out in an organic, petal-like pattern.

The number seven holds sacred meaning in a multitude of cultures and religions, and as a student of spirituality in several forms af Klint painted with strong intention of exploring the intermingling of symbolism. There is no singular meaning. She seamlessly interweaves divine inspiration, biomorphic design, and mathematical diagrams into an artful Rorschach for the viewer to dissect.

While the hues in No. 1 are slightly more muted than some of her other work, the bold pops of primary colors ground it in af Klint’s signature palette: moody reds, cool blue accents, and of course her signature golden yellow. While most of her work was created between 1906-1915, her oeuvre of large-scale, vibrant paintings have captivated an ever-expanding international audience only recently. At the time of her death in 1944, none of her work had been seen by outsiders. She left over 1,000 paintings and drawings and a huge collection of notebooks and sketchbooks to her nephew, with instruction to keep them away from the public until 20 years after her death. It took several decades longer for the art world to catch on to her historical importance.

It’s undeniable that af Klint was positively scientific in her pursuit of the ethereal, in her spiritually-driven desire to transcend the tangible. But at the root of all the methodical obsessing and brilliant art-making is an irrepressible, infectious lust for learning. One of the reasons we find ourselves so absorbed in Seven-Pointed Star No. 1 and af Klint’s larger body of work is the way it involves us in the process of discovery, the joy of mystery, her genuine engagement and interest in learning life’s secrets. When the weight of the world feels crushing and confusing, a little of af Klint’s attitude goes a long way. How’s that for a Hilmantra?

P.S. Craving more juicy af Klint history? We’ve taken a deep dive into the Hilma-verse over the years, tapping experts like Allison Meier and Christine Burgin to help peel back the many layers of these incredible artworks on our blog.