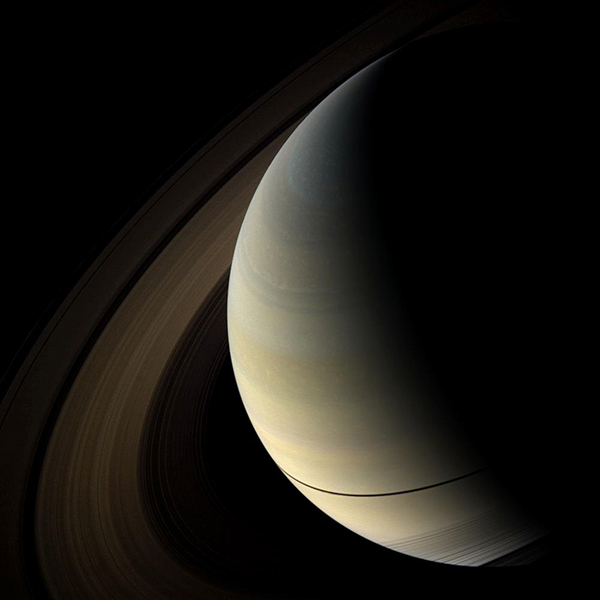 As we anticipate the launch of NASA’s Artemis I, which will lead to the first woman and person of color on the surface of the moon, we’re excited to bring you a new Space Edition from an earlier groundbreaking mission: Narrow Band. Shot during NASA’s Cassini mission to Saturn, Narrow Band refers to the thin shadow that Saturn’s rings cast on the planet.

Saturn, the first written records of which date back to about 700 BCE, has captivated humans for centuries. Early astronomers debated the composition of Saturn’s famous rings, with many believing them to be solid structures—though, notably, not Gian Domenico Cassini, a 17th-century astronomer for whom the Cassini mission was named.

We now know that the rings, which hang moodily on the left hand side of the frame in Narrow Band, are made mostly of ice particles theorized to be chunks of a moon that got too close to the planet. The ice particles range in size from as small as marbles to as large as buses. In many places the rings are only about 30 feet thick—in comparison, they are 165 thousand miles long—resulting in the eponymous Narrow Band.

Cassini’s discoveries revealed troves of data that scientists are still combing through today, 25 years after its launch. In Narrow Band, the uniquely recognizable shape of Saturn is rendered almost abstract—mysterious and shadowy, but also somehow not remote. There’s a warmth here that’s hard to deny.

The Cassini mission was revelatory in many ways, particularly in how we conceive of and understand the solar system outside Earth’s immediate vicinity. On Titan, one of Saturn’s moons, Cassini found geological features stunningly similar to those on Earth, including rivers and volcanoes. Any water on the brutally frigid Titan would be impossibly frozen, but liquid methane is prevalent, and carves out a familiar landscape.

Cassini’s revelations of the familiar might contribute to particular closeness the craft’s engineers on the ground felt with it. In a delightful piece by Alan Burdick in The New Yorker, Larry Soderblom, a geophysicist who has been with the Cassini mission since the beginning, reflects on the cyborgian nature of the relationship between NASA engineers and Cassini:

The Cassini mission ended on September 15, 2017 when, to avoid contaminating any of the surrounding bodies with material from Earth, the spacecraft was plunged into the depths of the gas giant. (The final days of the mission were captured as part of the documentary series “7 Days Out”.) What remains of Cassini are photographs and data points—Narrow Band offers viewers both a piece of scientific history, and a personal connection to the cosmos.