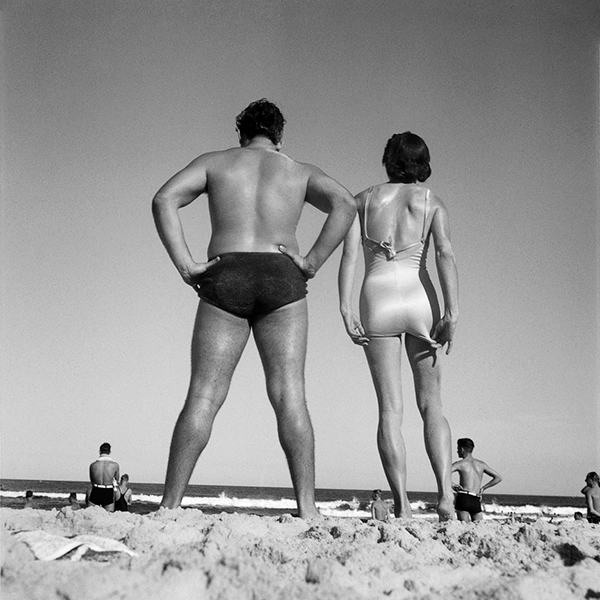 With the unofficial start to summer just around the corner this weekend, we’re headed to the beach—Bondi Beach, that is. We’re kicking off the sunshine season with a Vintage Edition that’s all about those summahtime vibes. Behold, Bondi Beach by Australian photographer, Max Dupain (1911-1992).

Shot in 1939, Bondi Beach embodies Australian coastline culture and the essence of a start-of-season beach day in a single frame. Using focus as a stylistic tool, Dupain distills a myriad of vignettes into a wholistic seaside atmosphere in full surround sound. His low vantage point captures close-up, freshly trodden crumbles of sand, heavily blurred as though the camera has been left behind where our protagonists parked their gear. Various characters survey the crashing waves still in soft focus while a group of rowdy swimmers revel in the distance, their bobbing heads barely distinguishable.

The smooth gradient of the cloudless sky frames our leading duo finally in focus. Yet, the woman on the right is ever so slightly sharper than her be-speedo’d partner, with the acme of clarity cresting over the silky sheen of her spandex suit. The real hero of this story is the unrivaled sensation of that first swimsuit twist of the season. Heralding hot days ahead, a fine-tuning of a fresh ‘fit is as familiar as that first whiff of sunscreen.

Located just outside Sydney, Bondi Beach has become synonymous with summer in pop culture. Born in Sydney in 1911, Dupain focused on a diverse range of commercial and artistic subjects, but he became best known for his documentation of Aussie beach life. With the iconic Bondi Beach practically in his own backyard, he always had ample inspiration—and a revolving cast of characters—to train his lens on. His style emphasized simplistic, graphic compositions with bold uses of light, shadow, and focus. Opening his own studio in 1934, Dupain drew influence from contemporary photographers like Man Ray and Walker Evans. Combining Modernist design with documentary photography, he devoted his career to his home and depicting what it means to be Australian.

Influenced by Vitalism, Dupain believed that a non-physical force existed in living beings, and the beach was a prime setting to portray this transcendent energy. But whether you’re a believer in a higher power or simply a seasonal sand-sitter, that inaugural beach trip aura is undeniably sublime. So embrace those vacation vibrations, welcome that warm weather wedgie, and salute the sunshine with Bondi Beach.