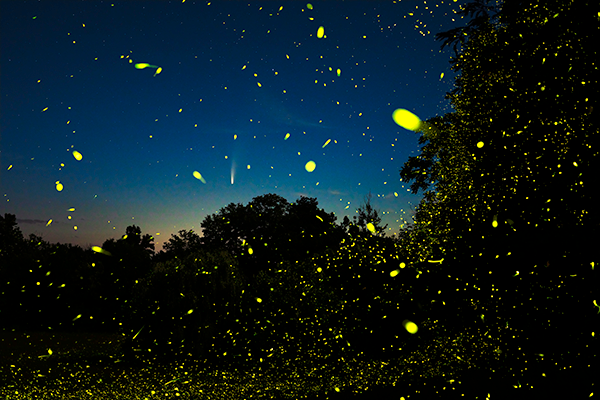 Greetings, artlings! We’ve got a brand new edition comin’ in hot from a galaxy far, far away—about 160 million miles away to be exact. Our latest edition from photographer Pete Mauney stars (get it?) comet NEOWISE, the baddest and brightest comet since 1997. Comet NEOWISE, Fireflies and the Hudson Valley Dawn. Columbia County, NY captures NEOWISE soaring through the night sky from Mauney’s home base in the Hudson Valley, flanked by a flourishing swarm of fireflies.

Shot in July 2020, Mauney’s image is a festival of lights. That month, NEOWISE was perfectly positioned and bright enough to be visible to the naked eye, even in areas with light pollution. Simultaneously, upstate fireflies were hittin’ the town for mating season resulting in a symphony of luminaries.

With layers of multiple exposures of firefly activity over a single, exceptionally focused frame of the comet, Comet NEOWISE is a Mauney masterclass on perspective and relativity. Using space and time (and lots of cameras!), Mauney teaches us about the balance of chaos and harmony in our world, compressing time and space to show how much life happens in a single, quiet night both near and far. Mauney invites viewers to stand with him grounded only by the treeline in silhouette, and see all that occurs in those nocturnal hours. And it really is all relative.

Traveling at about 2,000mph in reality, NEOWISE seemingly floats suspended amongst the stars in Mauney’s pre-dawn shot, contrasting with the luminous chaos in the foreground. With over twenty species of firefly in New York, each with its own flashy signal and pattern, these lightning bugs produce a nightly flight map that rivals NYC Metro Air Traffic.

Comet NEOWISE is our sixth edition with Mauney, and his process never ceases to inspire. Producing these beautifully tumultuous images actually necessitates stillness and tremendous patience. Hunting for the densest firefly hotspots, Mauney explores the local wilderness around his Hudson Valley home to find the right clearing or thicket in which to situate himself for the evening, alone. He sets up his cameras, and waits. And waits some more. In this way, he captures more than the eye could ever see at once—a firefly-laden fifth dimension that’s as alive with the complexly coded flight paths of these soft-bodied beetles as it is ethereal and ephemeral.

There’s much to be enjoyed in the mere surface aesthetics of these photographs, and how they so perfectly capture the beauty and mystery of a quiet, dark night in the country. But Mauney's painstakingly patient bending of reality is the true magic here, and the images he produces are the richest of rewards.