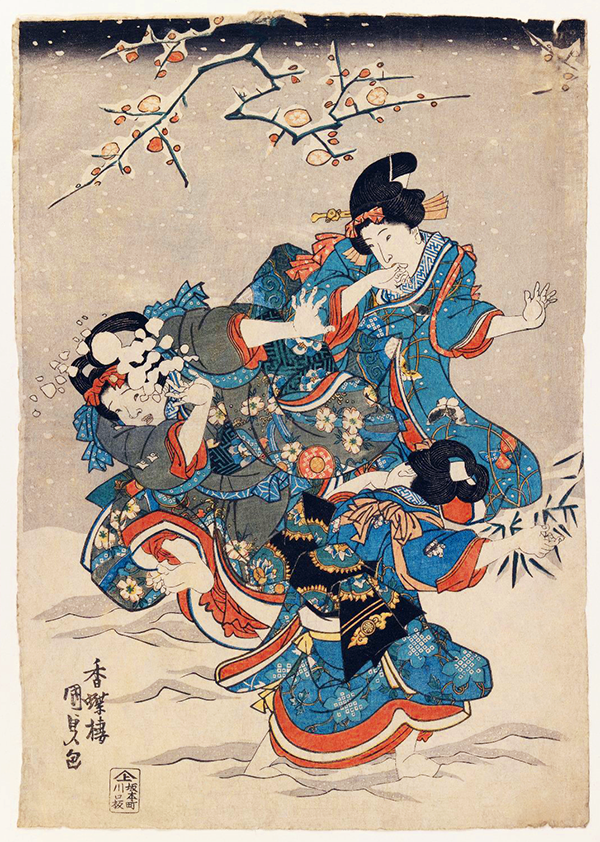 Snow Scene captures three women playfully battling beneath the trees on freshly fallen snow. A hint of night sky peeks out from the top of the scene, with the rest awash in fat flakes of a white storm. We catch them at peak snow day glee: one dodging clusters of frozen flurries while another winds up for an encore. The women bend and twirl around waves of brightly patterned fabric, a gorgeous choreography of chaos and joy.

The theatrical composition of these kimono-clad gals was a hallmark of Kunisada, who was famous for his portrayals of kabuki actors and bijin-ga, or portraits of beautiful women in the latest fashions of the time.

Born in 1786 in Honjo, Japan, Kunisada began producing prints as early as 1807 and continuously developed his style until his death in 1865. Toward the end of the Edo period in the 1850s and ‘60s, Kunisada, Hiroshige, and Kuniyoshi—all part of the Utagawa school of ukiyo-e—were three of the most widely renowned woodcut print artists in Japan at the time. Unfortunately, as the genre gained popularity among European and American collectors in the late 19th and early 20th century, all three came to be regarded as inferior to the earlier greats of classical ukiyo-e such as Katsushika Hokusai. Toward the middle of the 20th century however, both Hiroshige and Kuniyoshi’s works were re-evaluated by Western art historians, and soon became considered masters of their art. Though it wasn’t until the 1990s that Kunisada’s prints returned to the spotlight to take their rightful place in art history.

While modern critics were late to recognize Kunisada’s significance, he was enormously popular amongst his contemporaries. In fact, he and his work were so widely admired that in order to help his fellow artist and friend Hiroshige promote his series The Fifty-Three Stations of the Tōkaidō, Kunisada produced his own version with one of his bijin-ga ladies posed in the foreground of each of Hiroshige’s landscapes. The original series went on to become one of the bestselling ukiyo-e series of the time. This same series was later spoofed by Kuniyoshi with the help of some furry friends, but that’s another story…

Anyhoo, with these days of wintry wonder waning, we’re saluting the best part of this polar season: play! Our team loves a good frigid fracas from the classic snowball fight to a blustery Blizzard. So in celebration of the ever-elusive snow day, take one final frosty frolic with us in Kunisada’s Snow Scene. And find more seasonal selects here!