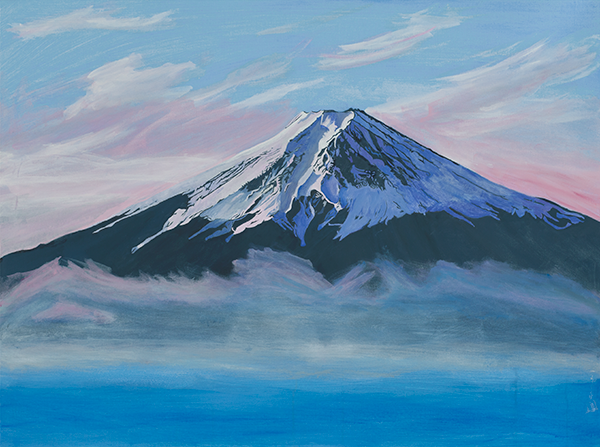 Our newest edition is satisfying some serious wanderlust by way of outlook-altering artwork. Rudy Shepherd’s blue-hued Mount Fuji, Holy Mountain series not only transports its viewer to Japan’s iconic snow-capped vista, but provides an entry point from which to ponder the power of sacred spaces, and how they fit into a world so often suffused with what the artist calls negative energy.

Perched on the island of Honshū, Mount Fuji is the highest mountain in Japan and seventh highest peak of an island on Earth. Though the colossus is located about 62 miles from Tokyo, it is visible from the bustling city on clear days and has become a cultural icon frequently depicted in art throughout history from Edo period ukiyo-e prints like this winter landscape or Hokusai’s teahouse all the way to Shepherd’s present day painterly interpretation. As one of Japan’s “Three Holy Mountains”—along with Mount Tate and Mount Haku—this active stratovolcano is famed for its remarkably symmetrical cone, which is blanketed in snow for about five months out of the year. The mountain has been considered sacred since ancient times, when samurai used the base of the volcano for a remote training area.

Shepherd’s Mount Fuji captures the hallowed summit filtered through a crisp, blue light. The balanced behemoth seems to float upward atop sweeping brushstrokes of morning mist, but is kept grounded by hazy pink horizon light seeping over its slopes. While the shadows and snowpaths of the craggy terrain are sharply defined, the surrounding sky and atmospheric accents are loose and ethereal. The image exudes harmony—a constant push and pull of elements that results in peaceful, pleasing stillness.

All these treatments emphasize Mount Fuji’s positive power. Shepherd’s long been interested in exploring the nature of evil through his work, and in a natural progression, possible solutions to “overwhelming forces of negative energy.” His Holy Mountain series—including his earlier edition, Machu Picchu—approaches this same ongoing exploration by focusing on mountains with profound spiritual or cultural significance. What do these powerful entities have in common? How does their portraitization deepen our understanding of each?

This isn’t the first time Shepherd’s reached for portraiture to access deeper understanding. His debut 20x200 edition did exactly that. Whether you’re seeking a way to rethink sacred space, redirect negative energy, or simply escape in a meditative moment, the journey’s yours to take with Mount Fuji, Holy Mountain series.