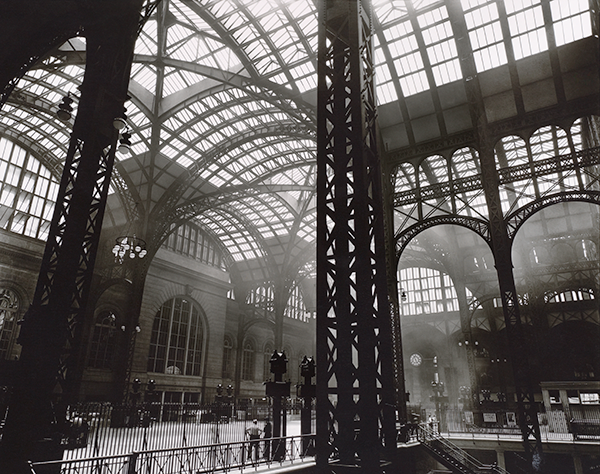 For some city folk, summer is high time to explore the urban jungle on foot, fire-hot pavement, and inhumane humidity be damned. For the rest of us, the air-conditioned reprieve of our apartments takes priority, but Berenice Abbott's metropolitan motifs always remind us why we love this city of ours—devilish summer heat and all. Feast your eyes on our latest Abbott edition, Penn Station, Interior, Manhattan, another stunner from the Changing New York series she shot as part of the New Deal’s Federal Art Project.

Penn Station, Interior, Manhattan isn’t just quintessentially Abbott—it’s a metaphor for her mode of seeing, her approach to documenting and understanding the city. Abbott saw New York City through its architecture, and what could represent a “Changing New York” more than Penn Station itself? Shot in the late 1930s, this image depicts the original structure of this NYC landmark right in the middle of its 53-year lifespan. At the time, it served as a symbol of progress, industrialization, and architectural mastery. Today, it is a reflection on loss, nostalgia, and the importance of historical preservation.

Having been demolished in 1963 and replaced by the modern sprawling edifice we know today, the near-empty interior of Penn Station exudes a ghostly atmosphere filtered through hazy steam rising from the platforms below. The heft of the steel uprights contrasts with the delicate tracery and glass vaults above. The building’s Beaux-Arts design is coupled with Classical Greek and Roman influences from the exterior colonnades to the interior arcades. The result is a deeply absorbing feeling of flux.

Abbott saw New York City for all its magnificent volatility, its perpetual growth and change, and the destruction and creation that came (and comes) with it. The Big Apple of Abbott’s eye prioritized expansion and evolution over all else, as exemplified by its constant architectural upheaval. Leave it to Abbott to convey this change in a way that was at once dizzying and exciting, frightening and beautiful.

Abbott’s work with Changing New York was as much a creative endeavor as a sociological study. Her goal was to distill and translate the personified essence of NYC into photographic form, while capturing its hustle and bustle, its culture and traditions, its crowded real estate,  its endless reinvention and superimposition. Penn Station packs an artistic punch with poignant sociological observation. For the history buffs, urbanites, or architecture aficionados in our midst, it’s a collectible moment not to be missed.