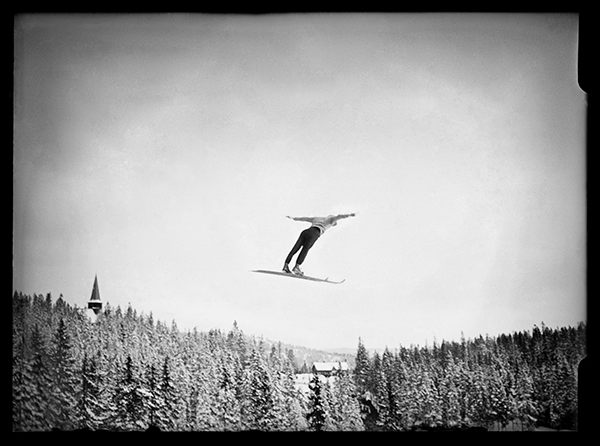 We’re flying high into February with our newest Vintage Edition, the sensational Ski Jumper by Norwegian photographer Narve Skarpmoen (1868-1930). With the Winter Olympics set to begin in just a few days, we couldn’t wait to share this slopeside stunner in celebration of this snowy sporting season.

Ski Jumper focuses on a sole central skier arms outstretched mid-jump over a sea of snow-capped spruce. The shot is breathtaking, literally. With no ground in sight, our fearless protagonist pauses at his peak adrenaline-powered air. Skarpmoen’s photo is a Wes Anderson-infused freeze frame of an action-packed moment—a symmetrical arrangement reading like an old film strip. The skier stands out in the foreground, while the forest of trees and tiny slanting roofs are seemingly flattened like a backdrop—a technique called planimetric composition and a favorite tool of our pal, Wes. Skarpmoen’s use of this configuration in combination with the sharpness of the image is what gives Ski Jumper its cinematic drama (think Willem Dafoe in The Grand Budapest Hotel).

Shot in 1924, Ski Jumper likely owes its crisp clarity to tremendous technical advancements in cameras of the decade allowing for much shorter shutter speeds. This leap (get it?) in photo technology was part of an ongoing pursuit of innovation for capturing high-speed sports. An earlier example of this ever-evolving shutter tech can be seen in another 20x200 Vintage Edition, A perilous ride. Shot almost forty years prior, the sportsman in A perilous ride is well-defined, yet the spokes of the wheels remain blurred by such rapid rotation. In contrast, after decades of lens and shutter improvements, Ski Jumper appears frozen in time and as sharp as the tips of his skis.

Skarpmoen specialized in outdoor photography, and pioneered press and event shots as a distinct area of expertise. He photographed our soaring athlete at the Holmenkollen Ski Festival in Norway, an international Nordic skiing competition held annually since 1892. The Nordic combined event consisted of a 15km race followed by two death-defying jumps, and made its debut at the inaugural Winter Olympics in Chamonix the same year this photo was taken. So in the spirit of snowsports and stellar snaps, we’re raising our glasses in a toast to Olympic strength—safe and sound from the ground, of course.