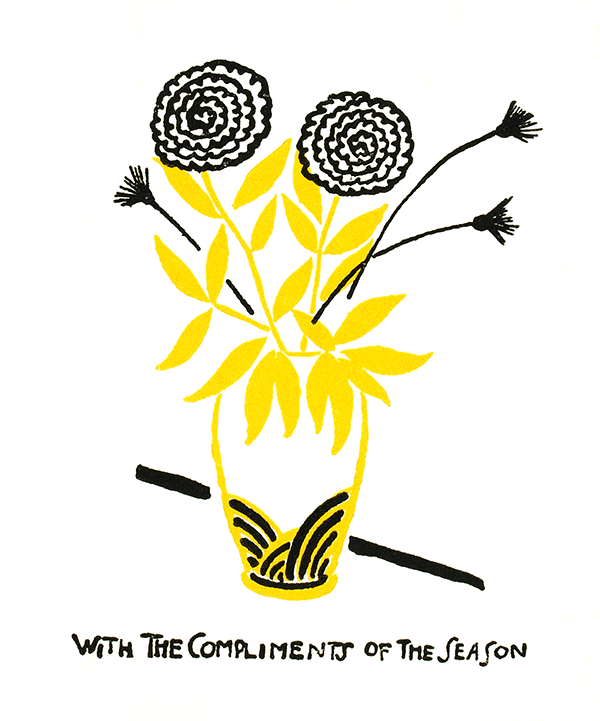 Spring has sprung, and we’re ready for some sunshine! Our newest Vintage Edition comes from American scientist and abstract artist H. Lyman Saÿen, With the Compliments of the Season. This sunny saying ushers some bright, bloomy bliss right into your space. Throw open those curtains, dust off those windowsills, this gorgeous gem is a salute to the season!

Created as a cut linoleum print on paper, With the Compliments of the Season strikes a balance between bold and playful. A beaming lemon-yellow contrasts deeply with heavy black lines that pop to the foreground. Though dark and thickly printed, the black stems feel delicate. The curvy lettering and playful ruffles of the round blossoms give the image a light buoyancy accented by an array of freshly fluffed foliage. Abstract and superbly simple, Saÿen’s piece is an ode to the gift of spring.

Born in Philadelphia in 1875, Saÿen grew up to become a gifted engineer and scientist. By age 18, his design for a large scale induction coil was cited at the World’s Columbian Exposition of 1893, and in 1897 he received a patent for a self-regulating x-ray tube. During the Spanish-American War, Saÿen ran the medical x-ray laboratory until being discharged after contracting typhoid fever in 1898. He then turned his attention to his artistic career enrolling in the Pennsylvania Academy of Fine Arts, and eventually moved to Paris where he developed close friendships with many important figures in the art industry including Henri Matisse and Pablo Picasso.

Though undated, With the Compliments of the Season was likely created around 1914-1916, when Saÿen returned to Philadelphia and became heavily involved with the emerging modern art movement in the United States. With him he brought a distinct Fauvist style, influenced by the strident colors and bold brushwork of Post-Impressionist artists.

Fauvism was a fairly short lived movement, but produced a flourish of vividly-hued landscapes and portraiture after some of the darker, subdued works of Symbolist art. And in a similar vein, after these long winter days—and some seemingly endless pandemic months—it’s time to let some light in With the Compliments of the Season.