This month's Guardians of the Galaxy blew us away with the force of an Infinity Stone—so much so that we were inspired to release our latest Space Editions, Torus Cutaway AC75-1086-1 5725 and Torus Interior AC75-2621 5718, two trippy, 70's-era NASA renderings of space colonization in which a genetically-engineered raccoon or tree-like humanoid might have looked right at home. (I am Groot!) 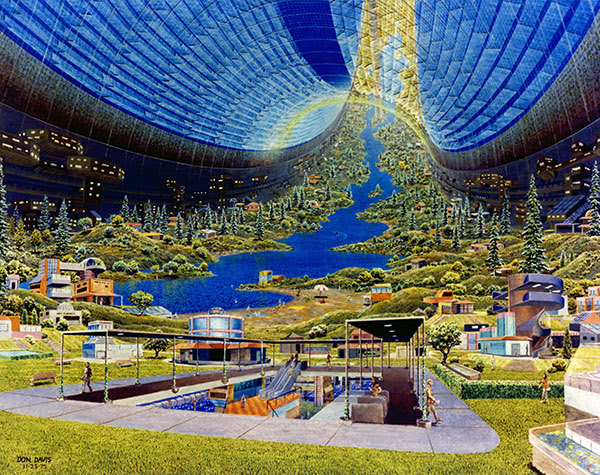 Back in the mid-1970s, space colonization was still thought of as the real deal, not sci-fi fantasy. It wasn’t just NASA who was pushing for a home away from home: In the summer of 1975, the NASA Ames Research Center teamed up with Stanford University on "Space settlements: A Design Study" to brainstorm what life in space would look like.

To show “every place where life is possible,” two painters from the Bay Area were recruited, Don Davis and Rick Guidice, to provide realistic—though futuristic—takes on human life inside a space colony. Torus Cutaway AC75-1086-1 5725 and Torus Interior AC75-2621 5718 are just two of their many designs. In particular, these two editions are kind of like twins—they show a different side of the same coin, both offering a take on what the same Toroidal (donut-shaped) colony would look like, just from a different perspective.

Torus Interior AC75-2621 5718  shows off this verdant colony from inside its donut-shaped hull: It’s full of lush trees, dome-shaped homes, even beach-blanket babies—and it looks a lot like earth. Don Davis, who painted this scene, found inspiration close to his own home, the Bay Area, and hoped this romantic depiction would remind people of California. 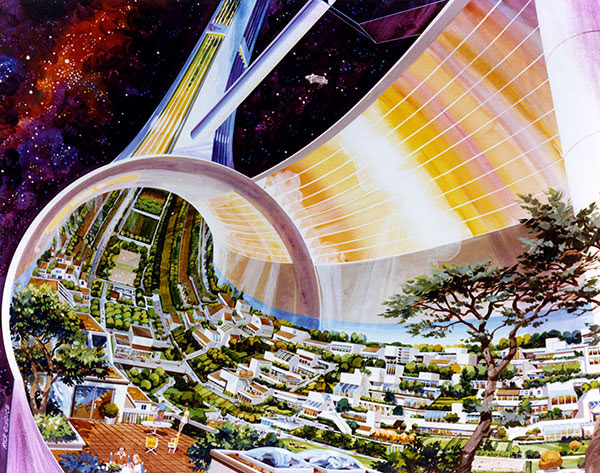 Ah, yes—California is not just a tech paradise on earth, but in the skies as well. In Rick Guidice’s Torus Cutaway AC75-1086-1 5725, we see plenty of homes, and in the lower left-hand corner we see two couples relaxing on a patio. In short sleeves and a skirt, this temperate climate definitely rings true to being a bit like the Golden State. But still, the perspective is completely different from any traditional landscape, with the curviness of the constantly spinning space colony suggesting a rotating horizon line unlike anything we’re used to seeing on earth. (Which is probably a reason why we were also reminded of Guardians of the Galaxy—these scenes look a lot like Xandar, where the always majestic Glenn Close reigned supreme as leader of the Nova Corps.)

“Space settlements: A Design Study” was just the beginning of any number of creative, forward-thinking—though slightly oddball—tech projects to come out of the Bay Area over the decades. Just some food for thought: Before there was Silicon Valley, there was Space Valley.