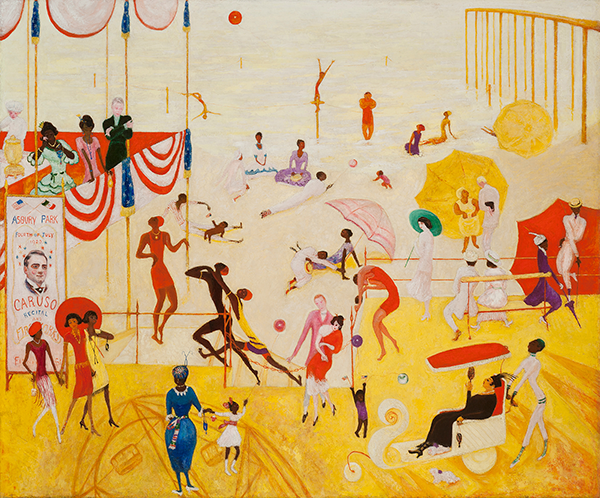 Our newest Vintage Edition is the vibrant and vivacious Asbury Park South, from the one-and-only Florine Stettheimer. Working in the first half of the 20th century, Stettheimer was a VIP across swaths of artistic communities, from visual art to performance to poetry. Asbury Park South was said to be Stettheimer’s favorite work, and the one she submitted to more shows than any other—and that’s just one of the reasons we think you’ll be thrilled to add this joyous edition to your collection.

Stettheimer, in some ways, seems out of time when it comes to what we think of as the norms of the early 20th century: she was a woman artist who created her best-known works after age 40; she eschewed marriage for the restrictions it placed on women; she hosted LGBTQ+ friendly salons with the likes of Marcel Duchamp and George O’Keeffe; and she was known for her exuberant irreverence, on display in pieces like Cathedrals of Art, our first Stettheimer edition. (If bad-ass Gilded-Age feminists are your jam, Barbara Bloemink’s new Florine Stettheimer: A Biography should be your next big read.)

Stettheimer painted Asbury Park South in 1920, after visiting the segregated New Jersey beach with author and Harlem Renaissance-patron Carl Van Vechten. Asbury Park has a long, checkered history when it comes to segregation, with its beaches forming something of a stage upon which the city’s racist policies played out. Local Black activists fought segregation on the beaches for decades, achieving incremental gains throughout the 19th and 20th centuries. Though over time laws were changed, and the city publicly disavowed discrimination on the basis of race in the 1930’s, Black visitors to the beaches continued to face discrimination, mistreatment and violence for decades.

“We fought for liberty and the salvation of this Union, and we are going to enjoy a piece of it.” – Reverend J. Francis Robinson, pastor of St. Stephen A.M.E. Zion Church in Asbury Park (1887).

Asbury Park South is an important painting in many respects, but most interesting is its portrayal of its human subjects, many of whom are Black. Stettheimer rejects the racist caricatures that were commonplace in the work of white artists at the time, and instead paints the subjects as unique, fully-realized personalities, as explored through their poses, actions, and dress. There are young women with Flapper-esque fringed dresses with held hands and arms slung over each others’ shoulders; stylish young men in dapper white suits and hats; older folks in more Edwardian-style dress; and kids in bathing suits playing in the sand.

In keeping with Stettheimer’s style, an integral part of Asbury Park South (and its political statement) is how it centers and celebrates the act of play. The human subjects are nearly all at leisure, enjoying each other and the beach. Play seems paramount when it comes to the activities depicted, but also in the composition. Elongated, graceful yet funny figures—Adam Gopnik describes them as Edward Gorey meets Bonnard—dance across the plane, while confounding shadows are cast in opposite directions.

In addition to the Black figures in Asbury Park South, there are also white ones, which feels less like a nod and more like a side-eye to the segregation of Asbury Park. Eagle-eyed viewers may also note the presence of Marcel Duchamp, Carl Van Vechten, Fania Marinoff, and Stettheimer herself among the beach's visitors, with the artist and her friends shown enjoying the festivities. In Stettheimer’s vision, the beach is integrated, and everyone’s having a damn good time. Hyperallergic’s John Yau, writing of a 2017 Stettheimer retrospective at the Jewish Museum, wonders, “When was the first time an American painter depicted an integrated social gathering?” Could it be Asbury Park South? Regardless of whether it was the very first or not, Stettheimer’s joyful and progressive painting occupies a remarkable place in American art history.